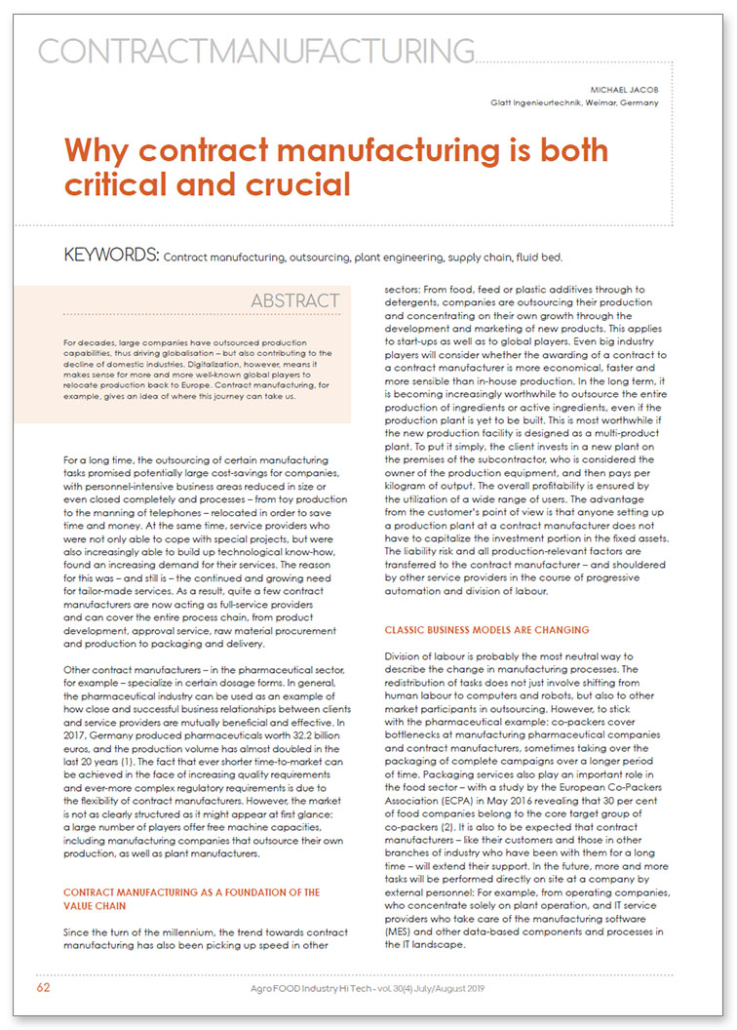 For a long time, the outsourcing of certain manufacturing tasks promised potentially large cost-savings for companies, with personnel-intensive business areas reduced in size or even closed completely and processes – from toy production to the manning of telephones – relocated in order to save time and money. At the same time, service providers who were not only able to cope with special projects, but were also increasingly able to build up technological know-how, found an increasing demand for their services. The reason for this was – and still is – the continued and growing need for tailor-made services. As a result, quite a few contract manufacturers are now acting as full-service providers and can cover the entire process chain, from product development, approval service, raw material procurement and production to packaging and delivery.

Other contract manufacturers – in the pharmaceutical sector, for example – specialize in certain dosage forms. In general, the pharmaceutical industry can be used as an example of how close and successful business relationships between clients and service providers are mutually beneficial and effective. In 2017, Germany produced pharmaceuticals worth 32.2 billion euros, and the production volume has almost doubled in the last 20 years.[i] The fact that ever shorter time-to-market can be achieved in the face of increasing quality requirements and ever-more complex regulatory requirements is due to the flexibility of contract manufacturers. However, the market is not as clearly structured as it might appear at first glance: a large number of players offer free machine capacities, including manufacturing companies that outsource their own production, as well as plant manufacturers.

Contract manufacturing as a foundation of the value chain
Since the turn of the millennium, the trend towards contract manufacturing has also been picking up speed in other sectors: From food, feed or plastic additives through to detergents, companies are outsourcing their production and concentrating on their own growth through the development and marketing of new products. This applies to start-ups as well as to global players. Even big industry players will consider whether the awarding of a contract to a contract manufacturer is more economical, faster and more sensible than in-house production. In the long term, it is becoming increasingly worthwhile to outsource the entire production of ingredients or active ingredients, even if the production plant is yet to be built. This is most worthwhile if the new production facility is designed as a multi-product plant. To put it simply, the client invests in a new plant on the premises of the subcontractor, who is considered the owner of the production equipment, and then pays per kilogram of output. The overall profitability is ensured by the utilization of a wide range of users. The advantage from the customer’s point of view is that anyone setting up a production plant at a contract manufacturer does not have to capitalize the investment portion in the fixed assets. The liability risk and all production-relevant factors are transferred to the contract manufacturer – and shouldered by other service providers in the course of progressive automation and division of labour.

Classic business models are changing
Division of labour is probably the most neutral way to describe the change in manufacturing processes. The redistribution of tasks does not just involve shifting from human labour to computers and robots, but also to other market participants in outsourcing. However, to stick with the pharmaceutical example: co-packers cover bottlenecks at manufacturing pharmaceutical companies and contract manufacturers, sometimes taking over the packaging of complete campaigns over a longer period of time. Packaging services also play an important role in the food sector – with a study by the European Co-Packers Association (ECPA) in May 2016 revealing that 30 per cent of food companies belong to the core target group of co-packers.[ii] It is also to be expected that contract manufacturers – like their customers and those in other branches of industry who have been with them for a long time – will extend their support. In the future, more and more tasks will be performed directly on site at a company by external personnel: For example, from operating companies, who concentrate solely on plant operation, and IT service providers who take care of the manufacturing software (MES) and other data-based components and processes in the IT landscape.

The increasing demand for production capacities in Europe is leading to a further blurring of existing business models. For years, manufacturing pharmaceutical companies have been offering contract manufacturing in order to utilize the freed-up capacities of their machinery. However, contract manufacturers are also “poaching” in foreign territories: They use the know-how they have built up over the years to build their own plants. If a customer wants to produce his own products after successfully entering the market, and consolidating his position, his contract manufacturer sets up a duplicate of the plant at which the products can then be produced using the wealth of experience acquired over the years. The concept is not only attractive for the European domestic market, but also, for example, for Asian customers, who can have their products manufactured to order in Europe. Innovative companies that no longer just import goods into Europe, but have them produced there, ensure capacity utilisation and jobs.

Contract manufacturing at plant engineering company
For plant manufacturer Glatt Ingenieurtechnik in Weimar, Germany, contract manufacturing is an additional business. The subsidiary in Weimar concentrates on planning and equipping. The sought-after technology partner for customer-specific processes and products can cater for kilo-scale specialties or production quantities of a few hundred tons (Fig. 1). Solvent-based processes are also possible. However, the engineering company’s core business is the planning and construction of plants and special machines based on its own fluid bed and spouted bed technology. In this segment, Glatt has the widest range of process control products on the market. Its engineers also provide engineering services for technology-independent production facilities around the world, and act as general contractors. The company has decades of experience as a supplier to the food, feed and fine chemicals industries, as well as to contract manufacturers, and is a sought-after research partner. Glatt offers its customers the complete spectrum: product development (Fig. 2), contract production (Fig. 3), plant construction and factory engineering. What’s more, laboratory-scale tests take place weekly in the Technology Center. There, powders are spray granulated and spray agglomerated in the fluid bed apparatus, and liquids are encapsulated and coated with a spray coating. Products are developed or optimized here in conjunction with the customer’s input (Fig. 4), and formulations for the production scale are formulated after market tests. In addition, the Weimar Technology Center also operates a plant for an advanced powder synthesis process in a pulsating gas stream. This, too, has capacity for contract manufacturing.

From the customer’s point of view, contract production at the plant manufacturer is preferable for many reasons. Anyone who wants to ultimately make their own products can bridge the gap until putting their own modular plant into operation, by gathering valuable experience for the production operation. If, on the other hand, it is necessary to test a product idea on the market first, contract production is the ideal way to make that happen. If the product proves successful, the system that has proven its worth can then be commissioned. The option of a trial fun before making a financial commitment is attractive for many. Glatt is an engineering partner in demand worldwide, specializing in the production and functionalization of solids such as powders, granulates, and pellets using its own technologies. As part of integrated projects, Glatt supplies all units – from laboratory to packaging lines and sanitation – for production facilities in the pharmaceutical, biotech, food and feed sectors. As a result, the Glatt Group has long been familiar with the many trends and issues that spill over from pharmaceutical manufacturing into other industries, such as GMP regulations.

Trends in contract manufacturing
Good Manufacturing Practice (GMP) plays a fundamental role in many areas of manufacturing. Quality assurance issues such as transparency, traceability, labelling and containments are increasingly becoming standard. Trends in API production – such as shorter development times and more dynamic product life cycles – are also an issue in the production of dietary supplements or enzymes. In any case, there is no alternative to thinking beyond one’s own proverbial horizons, industry and country boundaries, because the global supply chain can no longer be simplified. For all its flexibility, risk management must also be the top priority in contract manufacturing – from product protection and cleaning processes, to clean documentation and traceability. In enzyme production, for example, there are numerous interfaces between the raw material and the finished product where personnel are exposed to health risks and impurities. This applies to batch operations, where individual batches of raw materials and GMP-relevant parameters can be better controlled, as well as to continuous processes. Microbiological monitoring and hygiene processes will gain in importance thanks to an increasing demand for natural raw materials. Demand for halal and kosher production, and allergen management, has also led to an increase in contract manufacturing requirements. In Europe, there is also a greater interest in sustainability, for example with regard to the electricity used to manufacture a product on a contract basis.

Conclusion
The signals for contract manufacturing are green. The outsourcing of production and the division of labour are key factors for seizing market opportunities and growth in the post-industrial age. For Europe as a production location, the rising demand for wage capacities offers great potential. But the European success model also depends on the economy and political efforts to preserve the achievements of the European Union and develop them for the future. Against this background, it is to be hoped that Great Britain, the cradle of industrialisation and one of the most important European economies, will finally cancel Brexit.

About the author:
Dr. Michael Jacob is Head of Process Technology Food, Feed & Fine Chemicals, Glatt Ingenieurtechnik, Germany. He holds a PhD in „Experimental studies and modelling of processes in horizontal fluidized beds for spray granulation”. He is also Director Process Engineering and Technology Center.

Faster to market – «There are enough good ideas, we just need to get...
Scroll to top