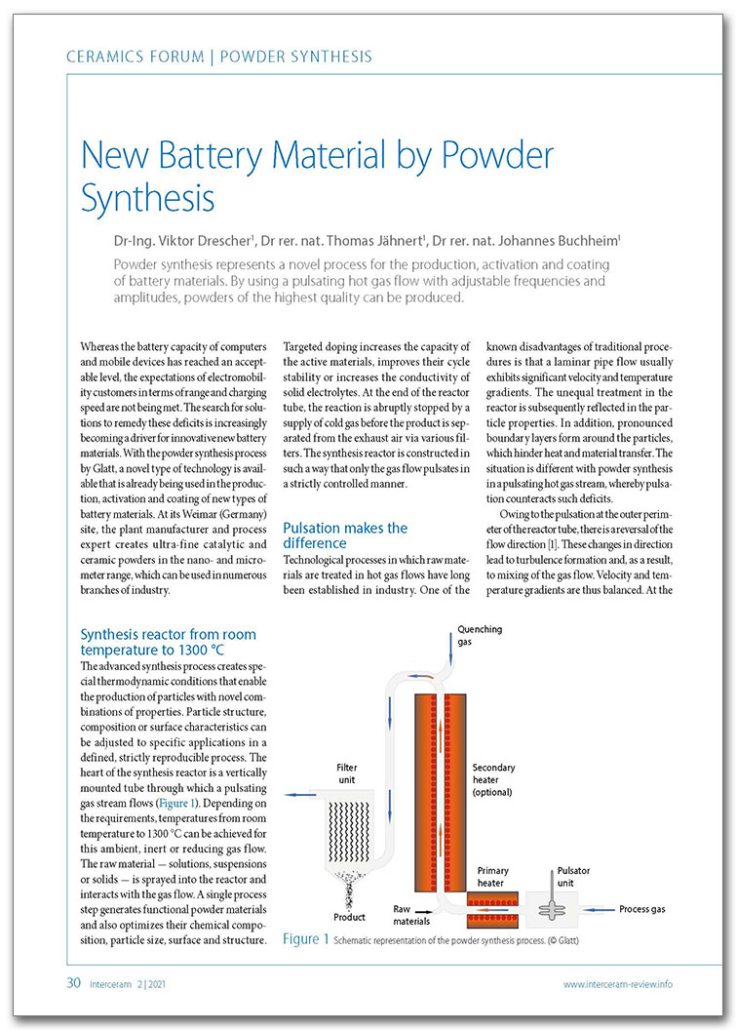 Powder synthesis represents a novel process for the production, activation and coating of battery powder materials. By using a pulsating hot gas flow with adjustable frequencies and amplitudes, powders of the highest quality can be produced.
Whereas the battery capacity of computers and mobile devices has reached an acceptable level, the expectations of electromobility customers in terms of range and charging speed are not being met. The search for solutions to remedy these deficits is increasingly becoming a driver for innovative new battery materials. With Glatt powder synthesis, a novel type of cutting-edge technology is available that is already being used in the production, activation and coating of new types of battery materials.

At its Weimar (Germany) site, plant manufacturer and process expert Glatt creates ultra-fine catalytic and ceramic powders in the nano- and micro-meter range with previously unattained properties, which can be used in numerous branches of industry.

The advanced synthesis process creates special thermodynamic conditions that enable the production of particles with innovative combinations of properties. Particle structure, composition or surface characteristics can be adjusted to specific applications in a defined, strictly reproducible process. The heart of the synthesis reactor is a vertically mounted tube through which a pulsating gas stream flows (Fig. 1). Depending on the requirements, temperatures from room temperature to 1300 °C can be achieved for this ambient, inert or reducing gas flow. The raw material — solutions, suspensions or solids — is sprayed into the synthesis reactor and interacts with the gas flow. A single process step generates functional powder materials and also optimizes their chemical composition, particle size, surface and structure. Targeted doping increases the capacity of the active materials, significantly improves their cycle stability and/or increases the conductivity of solid electrolytes. At the end of the reactor tube, the reaction is abruptly stopped by a supply of cold gas before the product is separated from the exhaust air via various filters. The synthesis reactor is constructed in such a way that only the gas flow pulsates — and in a strictly controlled manner.

Technological processes in which raw materials are treated in hot gas flows have long been established in industry. One of the known disadvantages of traditional procedures is that a laminar pipe flow usually exhibits significant velocity and temperature gradients. The unequal treatment in the reactor is subsequently reflected in the particle properties. In addition, pronounced boundary layers form around the particles, which hinder heat and material transfer. The situation is different with powder synthesis in a pulsating hot gas stream, whereby pulsation counteracts such deficits.

Simulation calculations prove that, owing to the pulsation at the outer perimeter of the reactor tube, there is a reversal of the flow direction [1]. These massive changes in direction lead to strong turbulence formation and, as a result, to excellent mixing of the gas flow. Velocity and temperature gradients are thus balanced. At the same time, the particles are thoroughly mixed, which leads to further homogenization (Fig. 2). Individual particles can easily be separated and dispersed because no local hot spots are generated in the reactor (with flame pyrolysis, for example, hot spots can lead to hard aggregates).

The pulsation also directly affects the particles in the reactor: first, it causes additional atomization of the droplets because of the mechanical forces derived from the pressure wave. The resulting smaller, secondary droplets dry faster because of their higher specific surface area and lead to a finer end product. Additionally, the pulsation also directly influences heat and material transport: the swelling and diminishing gas velocity is reflected in a similar pulsating particle velocity in the reactor. Both oscillations are phase-shifted as a result of particle inertia, whereby a relative velocity between the particles and the gas flow can be achieved throughout the entire reactor. Together with the mechanical forces at the impact point of the pressure waves, the formation of a thermal or concentration boundary layer can be prevented.

The highly flexible nature of the technology enables the production of a wide variety of powder materials. In addition to ingredients for ceramic membranes for fuel cells or filtration, for catalyst materials and/or pigments, Glatt powder synthesis offers a broad array of possibilities for the field of battery materials — constituents for cathode, anode and solid electrolytes can be produced or refined.

As the cathode in most batteries represents almost half the total volume and drives up its price, the development of cost-effective, highly efficient and durable materials is of utmost importance. The special conditions prevailing in the synthesis reactor allow targeted structures to be created and optimized. Next-generation materials, such as lithium nickel manganese oxide (LNMO), can thus be synthesized, modified and also produced continuously in larger quantities. The particle size and crystal structure can be specifically influenced via the system parameters (temperature, oscillation frequency and amplitude). In feasibility studies, very fine particles (<5 µm) with characteristic octahedron structures have already been produced (Fig. 3). Targeted dopants are also easy to generate (Fig. 4). This enables a further increase in capacity and significantly improves the efficiency of charging and discharging [2]. The synthesis of cathode materials such as LNMO takes place in a single process step and is based on cost-effective raw materials. This makes scale-up and future large-scale use eminently feasible.

Carbon-based anodes have dominated the market in the past. Yet, the push for higher capacities is increasingly forcing manufacturers to find alternative solutions. Silicon in particular is predestined for this application because of its abundant availability and high specific capacity (Li15Si4 = 3600 mAh/g versus LiC6 = 372 mAh/g) [3]. The technical challenge with silicon, however, is the volume change that occurs during the charge/discharge cycle (Li15Si4 = 320% versus LiC6 = 10%), which eventually leads to particle breakage, loss of contact with the current conductor and continuous erosion of the protective boundary layer between the silicon and the electrolyte. As such, a promising approach is the use of silicon-carbon composite materials: the carbon compensates for the volume change of the silicon and protects it as an elastic layer from direct contact with the electrolyte. When using powder synthesis, a suspension — consisting of the silicon particles, a dissolved organic binder and, if necessary, further additives — is introduced into the pulsating gas flow. Depending on the process control, the silicon particles can then either be agglomerated (Fig. 5) or the dissolved substance wets the particles and dries as a layer there. If required, the binder or layer phase can also be pyrolyzed in the same process step via an appropriate temperature regime.

Battery development is increasingly moving towards solid-state alternatives. The most difficult part is developing a solid electrolyte to compete with the ionic conduction of liquid electrolytes. Two main concepts are currently being pursued for this, involving either oxide- or sulfide-based ion conductors. Glatt powder synthesis has been successfully used in various projects for the development of solid oxide electrolytes, including lithium lanthanum zirconium oxide (LLZO) (Fig. 6) and doped variants thereof. The primary goal was to investigate how the synthesis could be simplified, manufacturing costs could be reduced and an effective scale-up concept created. As a result, LLZO solutions based on low-cost raw materials were implemented using powder synthesis. The particle size, bulk density and crystal structure were set by adjusting various parameters. The further processability of the powders into ceramic films was also demonstrated. Conventional processes for the production of LLZO are usually in the gram or kilogram range. The advantage of the described technology is that the technique can be easily scaled-up to production volumes.

Powder synthesis is an innovative and universal processing tool for the production of customized cathode, anode and solid electrolyte powders. If required, functional core shell particles with application-specific layer thickness, porosity and activity properties can also be obtained. At the same time, the heat treatment is more homogenous compared with other methods and offers a wider range of material applications — without hard aggregation, with easier scale-up. Glatt also provides the option of combining the technology with other downstream process steps and can optimally adapt it to specific customer requirements to transform the new powders into dust-free, functional granulates with further optimized properties. Various technologies are available for feasibility tests and scale-up at the Glatt Technology Center in Weimar, Germany.